Home Our Cooperative News Better Health Through Heat
May 1, 2021
News

The hidden and tasty benefits of fun, fiery, sweat-inducing peppers

Compared to individuals who rarely or never ate chili peppers, the analysis found people who regularly consume chili peppers had:

None of this comes as a surprise to Smokin’ Ed Currie of Fort Mill. Featured in Netflix’s November 2020 docuseries “We Are the Champions” for breeding the world’s hottest pepper—the Carolina Reaper—Ed first got into chiles for health reasons.

“When I left for college in 1981, my parents told me I was probably going to die of heart disease or cancer,” he says. “They suggested that if I wanted to keep the current lifestyle I was living at the time, I’d better do something about it. We have a history of cancer in the family as well, so I took their advice to heart.” 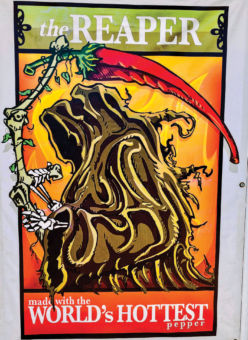 Ed’s research led him to capsaicinoids— the active ingredient in hot peppers.

“What I found was that the indigenous populations living around the equator had less heart disease than the rest of the world,” he says. “I determined that these differing cultures spread around the globe had five things in common, but the only thing I could study in a chemistry lab
was capsaicin.”

Originally isolated in 1878, capsaicin is a phytonutrient that occurs in the fruits of most plants in the Capsicum genus. In 1961, substances similar to capsaicin—with about one-third the potency—were isolated from chili peppers by Japanese chemists, who named the group capsaicinoids.

Capsaicin and capsaicinoids stimulate the nerve endings of the skin, trigger the secretion of gastric acid and cause a burning sensation in the mucous membranes. However, a pepper’s relative hotness or spiciness is not about the sense of taste, as there are no taste buds associated with capsaicinoids.

“All mammals have TRVP1 receptors that cause us to perceive capsaicin as heat,” Ed says, “but there’s no actual heat there. You’re not going to burn a hole in your throat or harm your stomach. There’s nothing that can quench the fire in your mouth because it’s a chemical reaction that your brain perceives as heat.”

To simplify the food science, the TRPV1 protein is designed to sense heat and cause a knee-jerk reaction, such as when one accidentally touches a hot stove. When capsaicin binds to TRPV1, it selectively activates sensory neurons that convey information about noxious stimuli to the central nervous system, which results in a sensation of burning pain. In short, peppers trick the brain into thinking there’s a fire. 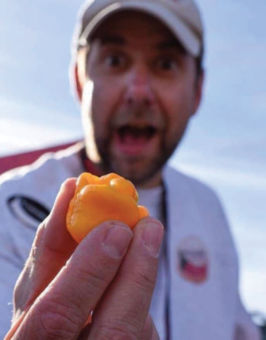 When the brain becomes aware of the fire alarm, it releases endorphins—neurotransmitters that relieve pain by blocking the nerve’s ability to transmit those signals. Among those is dopamine—responsible for the sense of pleasure and reward. For some people,
that means eating super spicy food triggers a sense of euphoria. Ed says he finds this element particularly compelling.

“Before we started growing all these peppers, I was a drug addict and alcoholic,” he says. “I dabbled in peppers, but my main business was getting high. In my understanding of addiction and my own experience, eating super-hot peppers is thrill-seeking behavior.”

Capsaicinoids bind with the dopamine receptors in the brain just like narcotics do, and similarly release endorphins in huge amounts.

“For someone that’s predisposed to addiction, this is something that makes you feel good,” Ed says. “So you want to do some more. Those of us who are really crazy about hot food usually have addiction issues in one form or another. Whether it’s jumping out of planes or climbing rocks with no ropes or shooting up with heroin, it’s all the same thing, just different forms. It becomes a ‘more is better’ thing and you really start chasing the heat.”

For some, as highlighted in the Netflix documentary, hot peppers have functioned as a bridge to achieving and maintaining sobriety.

“I got clean in 1999,” Ed says. “And I met this beautiful woman. She wouldn’t give me her name or her phone number, and she called me a funny little man. But my head, heart, and stomach were aligned where she was concerned. I finally learned that she liked salsa, so I whipped up some peach mango salsa and used some peppers and tomatoes I’d grown in the yard. She finally asked, ‘Who made this salsa?’ and we got married nine months later.”

At that point—between peppers and tomatoes—Ed had roughly 1,000 plants growing on their property. His wife, Linda, realized the ever-growing demand for his pepper products and suggested they start a business. 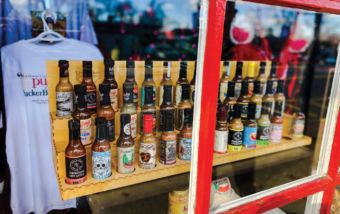 “She took it to the farmers market and she sold a bunch of it,” Ed says. “That’s also around the same time I met the local representative of the South Carolina Department of Agriculture, who told me I needed to start following some rules they had put in place. In about 2004,
I started legally selling hot sauce, and it’s grown and grown from there. At this point, we are probably the largest of the second-tier hot sauce makers in the country—first-tier being things like Tabasco, Texas Pete, and Sriracha.”

While hot sauce has been a boon, what Ed’s business really does is grow hot peppers to supply other manufacturers such as Campbell’s and US Foods.

“Right now, we’re the largest organic hot pepper farm in the nation,” Ed says. “If it’s hot and it’s in the grocery store, chances are we have something to do with it, whether it’s powder or pepper mash or our own products.”

That line of products—sold under the PuckerButt Pepper Co. label—can be found at an online store offering hundreds of hot sauces, salsas, and seeds. Many of them highlight the Carolina Reaper—originally developed by Ed and official the Guinness World Records’ Hottest Pepper on the Planet since 2013.

When comparing the intensity of chili peppers, capsaicin is measured on the Scoville Scale and expressed in terms of Scoville heat units. Originally, this was intended to reflect how many drops of sugar water were required to dilute the heat of the pepper. Because this was highly subjective, it has since been replaced by high-performance liquid chromatography—a process that reads the chemical fingerprint of capsaicin and can measure exactly how much a pepper contains. 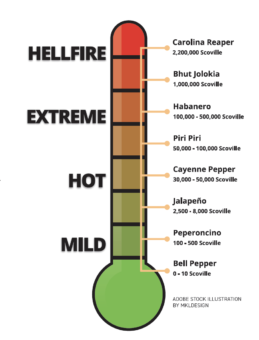 To get a sense of the punishment packed in a Carolina Reaper, consider that a spicy- to-many jalapeno pepper comes in at a range of 2,500 to 8,000 SHU. Guinness clocked the Reaper at 1,641,183 SHU. It has been subsequently measured at peak levels of more than 2,200,000 SHU.

If tormenting your friends, family or your own TRPV1 receptors sounds compelling, PuckerButt Pepper Co. offers everything you can imagine and then some. Its retail store on Main Street in Fort Mill is akin to the diabolical Willy Wonka Chocolate Factory, with innocent-looking capsaicin-filled chocolate bars cheerfully displayed beside a tasting bar where you can sit and sample the sauces before committing.

While Ed dominates the organic hot chili-growing space, he hopes to transition the business into being the largest organic pepper farm in the U.S.

“The people who were growing those milder products previously were living in areas in the Southwest where they just don’t have the water anymore or where regulations have put them out of business,” Ed says. “I’m not going to hurt anybody by getting into it, so it’s something I’m going to do.”

Ed has an overarching business philosophy that there is always room for everybody to succeed.

“Earlier today, I was on the phone with a company that makes brownies,” Ed says. “We can make our own brownies. We have all the equipment to do it. But they make really good brownies, so we had them make some hot. We sell their product in the store, and it gives them a chance to succeed. If someone can do something really well that I can do mediocre, I want to give them a chance to run with it.”

This synergetic spirit is most pronounced in how Ed runs his own company.

“Something I never saw coming with this whole journey is the family that we’ve put together,” Ed says. “A lot of businesses have employees. I don’t really have employees. I have family. We love each other and we trust each other. We work together to achieve a common goal, which is good for everyone, and it is a really satisfying relationship. Everybody calls me Boss Man, but we all treat each other as equals.

“I’ve got to take the garbage out to my van in a minute because it’s the only vehicle it will fit in. And that’s just the way it goes. They know I will always do anything that I’m asking of them, and odds are I’ll already be doing it before they get to it.”

This is something Ed learned by reading the work of Sir Arthur Guinness—an Irish brewer and the founder of the Guinness brewery business, which more than a century after his death went on to develop and print the Guinness Book of World Records as marketing material for the brand.

“Guinness treated all his employees as family at a time the industrialists were not,” Ed says. “I applied that philosophy, and it’s worked out really well. The loyalty you experience with family is just amazing. God has blessed me so much, and I get to have so much fun. It’s unbelievable.”